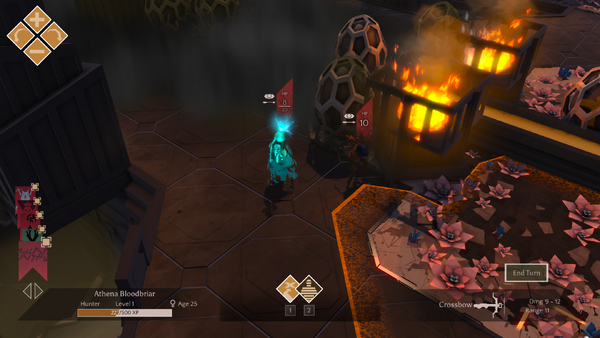 Tactical is a main gameplay mode of Massive Chalice. In the strategic mode of the game, the ruler manages the affairs the nation, largely aimed toward developing a retinue from which a sufficiently strong vanguard can be formed to fend off a Cadence attack. In the tactical mode, the five heroes selected for the vanguard actually attempt to fend off such an attack under the tactical direction of the ruler.

The combat is turn-based, with the vanguard getting its turn first, followed by the Cadence getting their turn. Units on a given side can act in any order desired during their turn.

Unless the creatures discover the heroes, they are in "sleep" mode: They will not attack on their own, unless provoked. As such, scouting needs to be done smartly - getting too far ahead can result in the heroes being overwhelmed by the sheer volume of monsters. On the other hand, a hidden scout can be an asset, spotting targets for alchemists and their hybrid classes to bombard.

Note that the "End turn" button simply consumes the remaining action points of the currently selected unit. The turn does not actually end until all units have consumed their action points.

Units can only see so many tiles distant. When first entering the battle, everything out of the sight of the vanguard is completely obscured by the fog of war, even the terrain. As the heroes move around the battlefield and see more of it, previously seen terrain will no longer be obscured, but only enemy units within sight of the heroes will be seen.

This can make careful scouting particularly important. It may be of little threat to be surprised by a few Seeds, but accidentally getting close to a Wrinkler or Twitcher can be very dangerous.